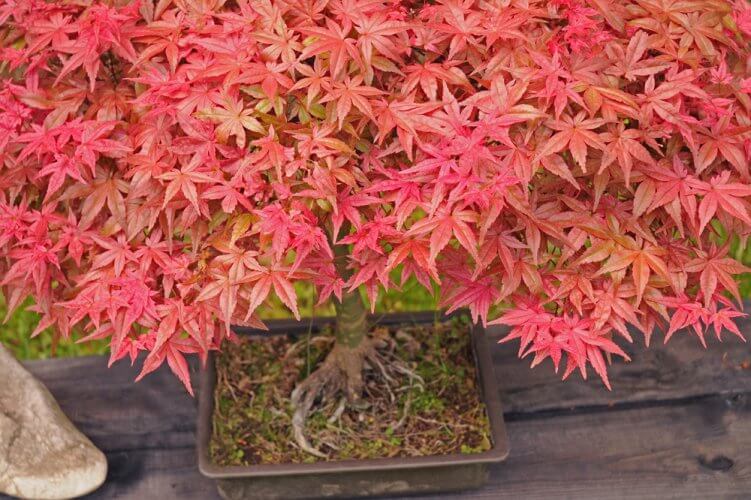 The ancient Japanese art of bonsai creates tiny replicas of full grown trees in extremely decorative containers. They make a wonderful accessory to any room and are fun to create and maintain. Bonsai trees can be formed into a variety of styles and shapes, and is easier to learn than most people think. The Japanese maple is not only an easy tree to grow, but it has many attributes that make it perfect for miniature growing. There are even semi-dwarf varieties of Japanese maples available for a different appearance. They also come in a wide array of leaf varieties including different colors and leaf shapes and may have textured, rough barks as well. The coloration of the Japanese maple bonsai leaves is defiantly its most attractive feature. They will often change during the seasons and range from blazing reds and dark greens to lighter pinks. Most people find these trees to be extremely pleasant to look at.

These particular trees are also easy to find. They can be purchased as seeds or as started seedlings several inches high. They can also be bought as young trees, which will make the process of creating a bonsai that much faster. One of the advantages in purchasing a small Japanese maple tree or growing one from seed is that you can grow them in small pots for the early stages of their growing life. This will help keep the tree small while the roots become bound to the pot. It also gives you the chance to watch the tree as it grows and select the best trunk parts you would like to feature through pruning.

When choosing a Japanese maple seedling or small tree, look for one that has the appearance of vigorous growth and that features low numbers of bands just under the bark between branches. These bands are dormant nodal growing points that will determine where new growth will occur after cuts to the main trunk are made. Having less of these will help you maintain the specific trunk line you want and diminish tall growth.

The bands or inter-nodes will be forced to grow closer together in this process. As soon as the first new leaves are formed in spring, open the growing tightly curled leaf with a pair of tweezers and remove the growing shoot in the center. It is best to do this right away to prevent the nodes from growing too far apart from one another.  Another shorter and less strong shoot will grow in about 2 weeks.

Every two years the tree should be removed from its pot and about ¼ of the root structure should be cut away. Then it should be repotted with fresh soil. This will also help reduce the plants growing abilities.Once you have chosen a type and size of Japanese maple bonsai that you want and have selected a decorative growing pot, then you can work on pruning it into the style you like best. Start by allowing the tree to grow about 3-4 pairs of leaves, and then you can trim off individual leaves back to 1-2pairs.

Eventually the goal is to create smaller leaves. Pruning branches close to the trunk and beneath the canopy will result in a denser look and more growth. You will also want to choose a specific trunk to grow from and prune it appropriately. Major pruning should be performed in the late summer to help the plant heal faster and reduce bleeding. Most pruning can be performed in the fall when the leaves are gone. Pinching back the shoots is the process that forces the tree to grow denser and shorter. This is performed by getting rid of the strong and vigorously growing shoots and forcing the plants energy into growing a secondary and smaller group.

Growing a Japanese maple bonsai tree is not difficult. It really only requires a minimal amount of maintenance and your reward will be a dwarf and decorative version of a beautiful tree.

The Various Types of Bonsai Trees